Accueil > A dream stay at the Grand Hotel in Cap Ferrat

A dream stay at the Grand Hotel in Cap Ferrat

During the “Monaco Challenge” on Sunday 21st March 2010, members of Lance Armstrong’s “Livestone Foundation” took part in the race.

Through Katarina Sporrek from Monaco-Stars-Events, the Foundation asked for a list of ECR’s patients so that they could take part in the prize draw it was organising. The prize was a two-night weekend break for two at the Grand Hotel in Cap Ferrat, including two gala dinners, breakfast and a spa treatment.
Halima was the lucky winner. The following photos show how delighted she was. 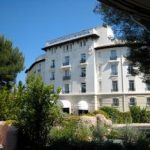 By making a donation, you will help the Association to provide a listening ear to patients and to purchase high-technology equipment in order to continue to improve their comfort.

END_OF_DOCUMENT_TOKEN_TO_BE_REPLACED

Volunteering is a commitment, a well-thought-out decision, a desire which matures deep within you, and which one day takes on a special meaning. END_OF_DOCUMENT_TOKEN_TO_BE_REPLACED

The Association’s activities are many - to listen and to help cancer patients and their families in particular. We need dedicated members and volunteers to provide them with all the comfort necessary.

END_OF_DOCUMENT_TOKEN_TO_BE_REPLACED

A healing weekend took place from June 17th to June19th in Saint Dalmas de Tende on Self-esteem and Self-welcoming. Through out sensorial movements and therapy dance of the 5 elements, Fabienne LEDUC made our body travel to bring awareness and wellbeing. These postures anchored in the present and self-presence resulted by joy and acceptance of ourselves, the faces lid up, the bodies let go and were relaxed. Participants regained their freedom, movement, and their creativity. A breath of fresh air in the everyday life allowed them to express themselves, exchange, motivate and link together.